Mowbray Ridge is one of my favourite hikes on Devils Peak, not least because I grew up in the shadow of Devil's Peak, and as a student it was one of the closest hikes from UCT. Most recently I've enjoyed it because you can fit a lot of scenery and serious ascent into an energetic half day, and still be back home to spend some quality time with the wife and kids. The last time I climbed Mowbray Ridge was a date I will not forget for two reasons, one of which, tragically, I blogged about at the time. But now it's time for an article about the hike that preceded that.

Mowbray Ridge is the northeastern corner of Devils Peak, and a very windswept corner it is too, especially when the Cape Doctor blows, which is most of the time on the ridge. The vegetation and outlook changes dramatically along a sharp line: lush and bushy on the eastern slope overlooking the Southern Suburbs and Cape Flats, and dry, frequently burnt and grassy overlooking the city and harbour on the north. At the base of the ridge is Plumpudding Hill, a rounded grassy shale outcrop above Rhodes Memorial. For years there was a radar beacon there, a sort of technological memorial to three fighter jets that crashed into Devils Peak in low cloud in 1971. The radar beacon has gone but the trig beacon and view are still there.

Further up, at the base of the cliffs, is the King's Blockhouse, another beacon and a couple of cannons. It's the best preserved of the forts on Table Mountain, and is still used as a radio relay station, I think. The area between Rhodes Memorial and the Blockhouse is unfortunately a hotspot for mountain muggings, so be warned.

Behind the blockhouse the climb starts in earnest. It climbs and scrambles rapidly through various cracks in the purple sandstone to the right of the ridge, and soon reaches a magnificent viewpoint at an old fire lookout house, now abandoned. One of the great 270-degree views on Table Mountain.

The path continues up the ridge and climbs less steeply on an open slope. At one point you have the choice of going along the Upper Traverse contour path to the right, or heading straight up the ridge. The path to the right is better in heavy wind if you have a fear of heights: straight ahead, the knife edge ahead is not for the faint-hearted, as it overlooks a huge drop into the enormous First Waterfall Ravine on the left. 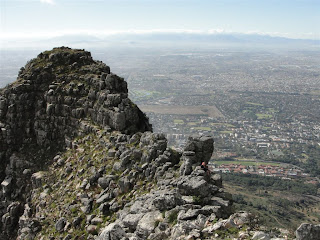 The knife edge descends slightly, then climbs again, ending in a short and steep scramble to Minor Peak, just above the nek at the top of First Waterfall Ravine. Really, with the sense of achievement you get at that point, it should have a more commanding name.

From Minor Peak, you have several options:

Hi Ian, great blog to have stumbled across. A good welcome back to the Fairest Cape, and an encouragement to dig out the old pack.