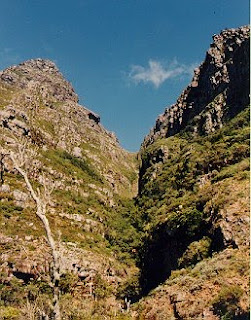 First Waterfall Ravine is a little-used climb up Devils Peak not marked on the new Mountain Club map, but the path has been in existence since the blockhouses were built at around the turn of the 19th Century. It is known as the 1000 Steps, which just about sums it up - quite a climb but with a very rewarding view from the nek at the top of the gorge. The gorge is reached from the Blockhouse above Rhodes Memorial: a path above the Contour Path skirts the mountain and enters the gorge. The ascent then begins in some indigenous forest, although there is a brief section out of the gorge to pass a waterfall. Towards the top the gorge is more open and very loose - tumbling rocks are a real danger and the party should stick close together. There are one or two rocky scrambles and the top section is very sandy and steep.

Once you have admired the view over the city bowl and Table Bay you can descend by Mowbray Ridge or take the frontal ascent to Devils Peak itself - best attempted with someone who knows the route.

Not to be confused with Second Waterfall Ravine, which is impassable and has claimed the lives of many unwary hikers.

A group of 8 of us decided to Recce 1st Waterfall Ravine with a view to including it in our list of scrambling hike on Table Mountain.

We started at Rhodes Memorial and approached the start of the ravine via the King's Blockhouse. The initial climb up to the first waterfall wall was uneventful. There is a clothes line tied from a tree above to the left - about 30m above and anchored in the ravine to a rock. We decided rather to look for the detour that takes you above this waterfall. This was found approx. 40m below the waterfall on the left (if you face the top of the ravine). There is a pile of rocks leaving on a tree serving as a cairn. The path follows easily out of the ravine for about 50m - at this point you can see approx. 5 steps of the 1000! The steps are almost totally gone. The path then progresses upwards and slowly to the right for 90m until re-entering the ravine above the first waterfall.

Continue upwards on extremely loose and very dangerous stones. Keep very close together until you reach the "slab" on the left - an apparent dead end. Climb into and up the second waterfall at this point - not do-able in the wet.

After emerging from the top of this waterfall the route continues to the top on extremely loose and dangerous rocks. We started a few minor rocks rolling - fortunately they didn't go far. It is almost impossible to to stop rocks from rolling.

Conclusion: This is NOT a route for the average climber and danger is immense. An accident is very very possible.
Compiled by Keith Bosenberg 0824606615