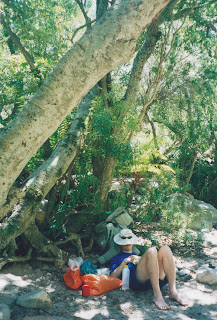 Saturday was a sad day. The top section of my wardrobe was getting out of hand and threatening to tumble out all over me, and it was time to donate my old backpack to a worthy cause.

Now this was a special bag. A Karrimor Jaguar 2, 65 litres, which I bought in December 1985 when I was a 12 year old Scout and just starting to do some real hiking. It cost R127.95 less 15% discount, plus 13% GST (I kept the receipt), money I got from Christmas presents and from a smallish cash prize I won at school. It came from a tiny but outstanding outdoor store called Camp and Climb in the basement of Cavendish Square, sadly long since closed.

Good design? Yes sir. Back then it was a new-generation internal frame bag that was comfortable as heck and seriously impressed the adults and older boys who I hiked with. It came in KS100E material with a lifetime guarantee, in an elegant shade of pale green. You could yank the straps while you wore it, which they called SAS, or the Self Adjusting System. I admit the last 24 years have seen some useful innovations in pack design (although I exclude those ridiculous bladder-water-pipe arrangements from that category), but nothing as revolutionary as the shift from external frames to comfortable, carry-able, packable-and-unpackable, adjustable, internal frame packs like this one. My 24 year old Jaguar 2 was still a match for most of today's packs.

Durable? Oh yes! 24 years later and the only damage was a small worn-through slit in a side pocket, where I once packed two gaz cylinders with metal rims which wore through the material when brushing against passing rocks. I learnt a small lesson about packing from that. The unbreakable hip belt buckle outlasted several buckles on my newer Backpacker bag. And I never did get to try out the lifetime guarantee, although later bags came in a material called Silvaguard with a 10 year guarantee which didn't last nearly as well. (Karrimor, to their credit, honoured that guarantee, but Silvaguard was never a match for KS100E). 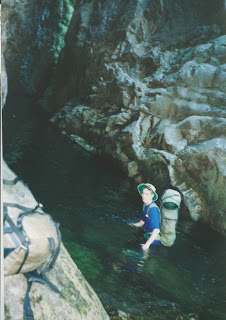 Clean? Well, no longer. In 1989 a fellow Rayner Trophy teammate kindly packed a bottle full of cooking oil in my bag without telling me, and it popped open. 750 ml of sunflower oil left some interesting tie-dye patterns on my sleeping bag, and some stains on the bag, but actually seemed to increase the waterproofing. Yes, it was washable, in a big bath of warm water and a few days in the sun to dry out the capacious foam hipbelt, but the cooking oil pattern lived on.

Well used? Absolutely. From my early teens, through my Springbok Scout hike, down the Wit Els three times at least (soaking up most of the river in the foam padding along the way), four 10-day Cederberg Adventures, all over the Cape, in all weather. I used it exclusively for more than 10 years, then decided I needed a larger 75 litre bag, but the Jaguar 2 kept going, either to lend out (it probably did more Cederberg Adventures in that role than I did) or for hikes where a smaller or older bag was more appropriate. The last major outing I can remember taking it on was the Wit Els in 2001.

Why pass it on now? You know, I'm not sure. I could have kept it in reserve and lent it out a few more times, and maybe I'll do the Wit Els again one day. But to be fair, its time had passed, and even the bag I bought as its successor is now a 14-year-old well-worn, well-travelled pack, with more hiking (and more airline miles) behind it than most packs can dream of. I could have kept it another 10 years until the kids are big enough to use it, but to be honest, it would probably not inspire the same reverence in them that I felt it deserved.

I drove around with it in the boot of my car (an Opel Meriva - similarly functional but sadly less durable) for a while, putting off the moment, but eventually I just had to grit my teeth and hand it over as a donation, along with a few other lesser items to reduce the blow.

Miss it already? You bet. Oasis in Claremont - you don't realise that you just got one of your finest gifts yet.
Posted by Ian Webb at 11:56

I'm packing mine for a 4 day hike in Kakadu National Park here in the NT. I bought mine in 1983. It only does a couple of hikes a year, it's faded and with a couple of patched holes but it still works fine.