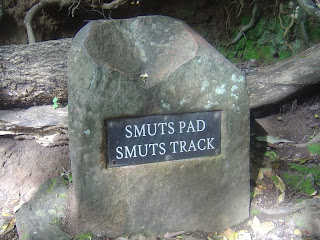 Smuts Track is one of the most popular hiking routes on Table Mountain. It's named after Jan Smuts, who was a keen outdoorsman and hiked this route energetically and regularly, well into his old age. Here's why I like the route.

Firstly, Skeleton Gorge. This is one of the most popular and most pleasant routes up Table Mountain. It leaves from Kirstenbosch, climbs through beautiful and shady indigenous forest, takes in a waterfall, includes a few wooden ladders and a scramble up a rocky stream bed, past a cave which is a perfect resting place, and finally emerges from the forest to give you a superb view over False Bay and the Southern Suburbs. It's not the easiest route, though: it's rocky and can be slippery near the top, and should be avoided in winter or after heavy rains, and like any direct ascent it can be challenging if you're not that fit. 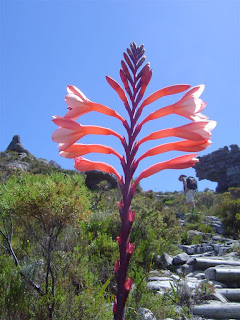 Once you're at the top of Skeleton Gorge, follow Smuts as he takes a sharp right and starts a more gradual ascent from the Back Table towards Table Mountain itself. This is a superb route in its own right, with clifftop views, dramatic drops (and a detour to Carrell's Ledge if you're up to it), a ruined cottage if you have the Slingsby map, disas and watsonias in bloom at the right time of year, and bizarre rock formations. 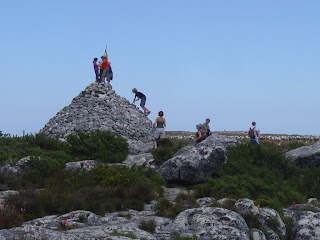 Then the top. Maclears Beacon is the highest point on Table Mountain (1086m) and has fantastic 360 degree views over the entire peninsula on a clear day. The wind can whistle and the tablecloth can cover you at any moment though, so be prepared for a bit of chill, even in summer.

From the top, it's a flat but fairly lengthy walk to the Cable Station, or you can descend via Platteklip Gorge, which is a long zigzag staircase taking you down towards the City Bowl. A good, efficient descent if your knees are up to it, and a very popular ascent too, even if it is rather unrelenting and exposed in summer.

I prefer a longer return journey, which takes you back to Kirstenbosch. From Maclears Beacon, retrace your steps until you are about half way back to Skeleton Gorge. Then turn right and follow an old stone aqueduct, which takes you through a pleasant and secluded valley ending at Hely-Hutchison reservoir. Unexpectedly, at the century-old dam wall, there is a waterworks museum which is worth a visit.

Then the descent via Nursery Ravine. It's similar to Skeleton, with great views and pleasant indigenous forest, but it's steeper and less shady than Skeleton Gorge so I don't generally choose it as an ascent. As a descent, it is great, because it has fewer irregular rocky parts and is less slippery than Skeleton, especially in winter. It also gets you down quicker.
Posted by Ian Webb at 12:35

How long does it take? Skeleton -> maclears -> nursery